Brian and I are back from the land of the dead possum. Yep, while us Aussies are used to dead kangaroos all over the road, the Kiwi equivalent is dead possum.

There are other contrasts as well such as hills that an Aussie wouldn’t believe (and the silly buggars put fences down them), corners that you need to indicate to get around,

and funny wet stuff that falls out of the sky.

However New Zealand is having its own version of a drought and was not as green as usual, and we only saw rain on a couple of days (as opposed to Rocky where we haven’t seen rain for a couple of months).

You may be aware of all the thrill-rides and wild activities you can do in New Zealand, but have you heard of the Devil’s Elbow? It may not look like much when you see it on paper – just a couple of big corners on the main road between Wairoa and Napier – but wait till you take that drive with your husband. Said husband is deep in reminiscence and thinks he is again 21 and driving a suped-up, after market V8 Holden Kingswood, probably off to a big party after a week or two of possum hunting. Hang on tight and pray the Electronic Stability Control is working.

Anyway, after the Devil’s Elbow and a quick rele-run to Taupo we headed off to the South Island for a lap. The west coast is as scenic and magnificent as all the brochures would lead you to believe. My favourite places were the glaciers and Fiordland. We walked up to the terminal face of Franz Joseph Glacier, picked up some 30yr old ice, took a chopper flight up Fox Glacier and beside Mt Cook and Mt Tasman

and saw some great reflections on Lake Matheson.

In Fiordland we went on an overnight cruise on Doubtful Sound which was just magic. 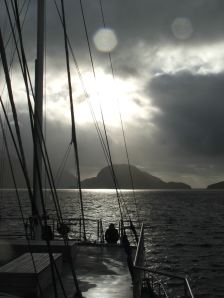 Brian and I spent most of the time annoying the captain, while a lot of the other tourists just sat in the dining room and read books or played games – and that was during the daylight! At one stage the captain let me steer the ship but when I made it lurch violently to starboard, he told me that I was no longer driving a tinny and to get out. Brian said he was trying to pour a cup of tea at the time and nearly spilt it on himself. I proudly told him “that was me”! We also did some kayaking on the Sound and saw dolphins and a seal colony. The seals, of course, did not impress a former abalone diver who also informed anyone that would listen, that dolphins were good to eat.

Another NZ highlight was the food which was all so fresh. I have developed a life-long appreciation of manuka smoked salmon, washed down with a good Marlborough sauvignon blanc. The guide book we had suggested we by-pass “shabby little Bluff”, but I’m glad we didn’t – more fresh seafood (big Bluff oysters for Brian) washed down with some more sauv blanc.

Perhaps the only disconcerting moment for me came the night we stayed in a pub and watched a rugby union game between a Kiwi and South African team. The referee, an Aussie, totally stuffed up the game in the last minute, causing NZ to lose the points. My loving husband cheerfully pointed out that I was the only Aussie in the bar – gee thanks Brian. I made it safetly back to the room unescorted while Brian made good with the locals for another hour or so.

Coming home to Rocky Springs and the continuing drought would have been a bit more of a let-down if it wasn’t for our farm-sitters Heather and Lindsay. Heather had cleaned the house from top to toe, made a fruit cake, frozen a curry meal, gave us a cuppa as soon as we stepped in the door and cooked us tea that night. Lindsay had serviced both the bikes, taken a dint out of the ute, got the seeder ready for work, balanced and spray painted an ornamental windmill; and to top it all off, Pep was fatter than he has been in years. Brian and I felt a bit abandoned when Heather and Lindsay left the next morning.

While we were away I indulged in a bit of girlie retail therapy and bought myself some beautifully aromatic rose oil cream. Several weeks back into the Rocky workload I decided to break out this little bit of luxury and was enjoying it all until Brian decided to share a bit of his history with me. Apparently when he was baiting possums in NZ he used to disguise the cyanide in rose oil. Therefore while I am trying to be soft and romantic, he is thinking of …….