At the moment Rocky Springs is littered with border collie puppies, fathered by Spy. They are five weeks old and nearly ready to be weaned so if you want one you’d better be quick.

They are endearingly cute and cuddly and I get a bit clucky around them. Puppies strike straight to this farmer’s heart and I thought it was an opportune time to share with you some puppy snaps from the family album.

Firstly there was Pep, a miniature fox terrier, who was born in Karratha in Western Australia and who spent his early years with me in the Pilbara deserts as I worked as an exploration geologist. As a result he was a dusty pup:

Then many years later, when Pep was almost a senior (but before digital cameras were popular), Brian and I took up farming full time and he imported two huntaway puppies from New Zealand. Jean was the great-grand-daughter of one of his original working dogs:

And Wag was selected, on pedigree, as a suitable mate for her:

Jean and Wag flew to Australia in a puppy cage and all I could see at the airport were eight paws. They were international travellers by three months old, but this did little to impress Pep who only wanted to beat them up.

Pep has unofficially fathered many pups. We had one neighbour a little annoyed with his mongrel looking mini foxie/cattle dog pups and we have reason to believe there is a strange dingo/foxie hybrid running around the Kimberley in WA. His only sanctioned romance was with a mini foxie/jack russell at Braeside, which resulted in four tiny, tiny puppies:

A week after Pep’s pups were born Jean and Wag joined the party with six black, brindle and tan puppies of their own:

From these litters we kept three pups who bonded in a cardboard box (well they did for the first week before the huntaway outgrew the box) and became life-long mates.

And the huntaway became Bo: 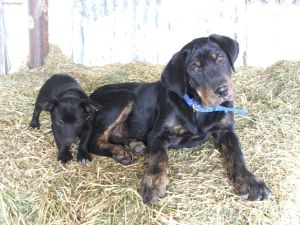 I cannot imagine life without dogs. They give so much – love, loyalty, laughter – and they help us understand the constant circle of life that is birth to death, with every stop along the way.

Do you have dogs Mob? And if not do you want a border collie pup?