This post is inspired by a naturalist who came to Rocky Springs posing as a water inspector (G’Day Peter). Officially he was here to check the two sub-artesian bores on the property, which didn’t involve much more than driving to the site and saying “well here it is”. Most of our time was spent discussing rocks, Tim Flannery and climate change and in the process I gave him an abbreviated geological tour of Rocky Springs.

Let’s start with the sandstone as it is the oldest.  This particular sandstone formed in the Jurassic period, probably in a marine environment, when dinosaurs were freely roaming the countryside. That means it is possible there is evidence of dinosaurs on Rocky Springs though I have not discovered any as yet.

The sandstone is best exposed in creeks where the overlying basalt has been eroded. In particular there is a beautiful spot on our creek, which I call the sandstone walls.

In close up the sandstone shows planar bedding, which indicates it was deposited in a relatively calm water environment.

As groundwater percolated through joints and fractures in the sandstone it formed ironstone concretions of various shapes and sizes. This concretion (about 15cm long) I have taken to the Wallaroo Hotel  and told the patrons it was a dinosaur egg. You dear Mob, would of course not fall for such a tall story. 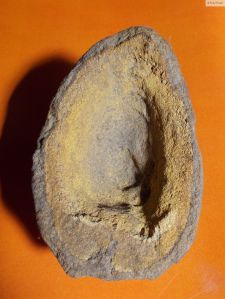 While I may be a bit short of dinosaur eggs I do have some wonderful examples of petrified wood. This one is actually an entire tree trunk showing growth rings (apologies for Clyde’s tail, which makes an appearance on the top right of the specimen).

In the Tertiary Age, when Tyrannosaurus Rex and his mates had shuffled off into history and when the first apes and mammals were beginning to appear, there were a series of volcanic eruptions over Rocky Springs. The lava was basalt and as it flowed ominously over the landscape it cooled into columnar structures or “crystals”. Although not as spectacular as the columns of Sawn Rocks near Narrabri in the Mount Kaputar National Park,

Rocky does have its own version, which I call Worn Rocks and if you can imagine standing on top of the columns and looking down upon them, this is what you would see (thanks to Bonnie for providing scale).

I have found some pillow basalts on Rocky Springs, which suggest the environment was still partly marine. Pillow basalts form when the flow hits water. The outer parts of the flow cool quickly and the molten inner breaks through the centre of the pillow. It must have been spectacular to watch: brilliant orange lava hitting water with angry spits and heaping barrels of steam.

Although the basalt is reasonably uniform and we curse it often as we bump over plentiful rocks, it does throw up some fascinating variations. These are aragonite crystals (about a foot long), which I found sitting amongst some basalt boulders one day. I may have told the pub patrons they were dinosaur teeth.

The two rock types lead to the formation of different soils. The sandstone produces light porous soil, which responds quickly to rain and which supports vegetation, such as the tumbledowns, not seen on the basalt. The basalt forms rich dark clayey soil that acts as a giant sponge. It takes a lot more rain to wet a basalt soil but once full it will hold water for a longer period. Basalt soil can bog a dog when freshly wet.

So there you have it – the magical mystical geological tour – no dinosaurs as such but an ex-geologist still finds much interest in her rocks.