Out in the west, way beyond civilisation as we know it, lie the opal fields. Here humpies and lean-tos take preference over houses, vehicles are rarely registered and names may, or may not, correspond to their owners. Hell, even the dogs here go incognito – when I asked one long-bearded bloke the name of his companion, his answer was succinct: “Dog”.

Come along on a tour of the Grawin opal fields.

Black opal, famed across the globe as a riot of colours captured within a black canvas, is found only in a small area of NSW, centred on the town of Lightning Ridge and extending to the even more remote fields of Grawin, Glengarry and Sheepyards. Brian, Col and I recently found ourselves on a camp at Grawin and there I met Jack and Mabel (not their real names). 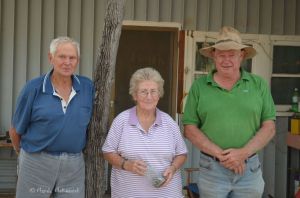 Jack and Mabel, banter bouncing between them, work an opal lease once the heat of summer has dissipated into autumn. Descending a narrow shaft, Jack sets to work with a jackhammer in search of the elusive stone, while Mabel stays up top tending hoists and generators. Once colour is found it is cut and shaped and presented to eager eyes. 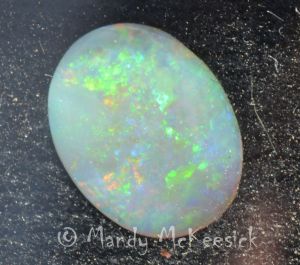 Not a black opal but a riot of colours regardless

At the Ridge people tend to camp on the mining leases but Grawin has designated residential areas. Jack and Mabel live in a rather upmarket (by opal field standards) shed, with a generator supplying power and a long-drop enclosed in three and a bit pieces of tin.

The shed is built on the older, worked out portion of the fields and below their feet are ball-rooms and tunnels representing the sweat equity of miners over time. This is the view from their front door, looking towards the neighbours. 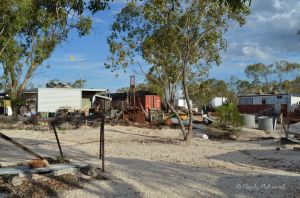 The white ground is made up of the tailings of those old mines and Mabel doesn’t have to wander far to find slivers of opal. In fact, she boasted, this is what she found from a couple of hours noodling; just around their camp. 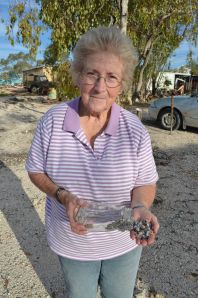 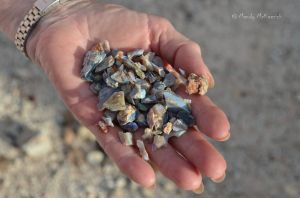 a fistful of colour

I can’t tell you their real names, have no idea what the registration number of their truck may be, or where their opal mine actually is but one thing I can say for sure: Mabel cooks the best biscuits this side of the black stump.

8 responses to “Jack and Mabel”