Way back when I was a child the old slide projector would be sporadically dragged out of the cupboard, dusted off and filled with images of Mum’s or Nan’s latest travel adventure. Sometimes the slide night would stretch on for hours.

While I’m not going to bombard you with a hundred photos, here is a sample from our recent romp to Northland in New Zealand. Put on the ugh boots, grab the hot chocolate, dive into the bean bag and let’s go.

We got ourselves some history at Kerikeri, where, in the 1820s, the formidable Maori chief Hongi Hika traded with the missionaries to acquire muskets which he then used in raids against other Maori tribes. Here the missionaries built this beautiful stone store beside the river, all the time surrounded by about 3000 of Hongi’s mob.

Then we found some of that famed Kiwi adventure: in this case the giant sand dunes of Te Paki where we climbed a very steep incline, puffed and moaned at the top, and then careened down the dune on a board. Then did it all again.

At Cape Reinga, if you listened very closely, you could hear the “snuffling of the spirits” as the departed Maori souls leapt into the ocean on their journey back to their ancestral lands. This is a beautiful, ethereal place at the northern tip of New Zealand where the Tasman Sea crashes into the Pacific Ocean.

We both fell in love with Mangonui Harbour and are already planning a trip back there. It is renowned for having the best fish and chips in New Zealand. 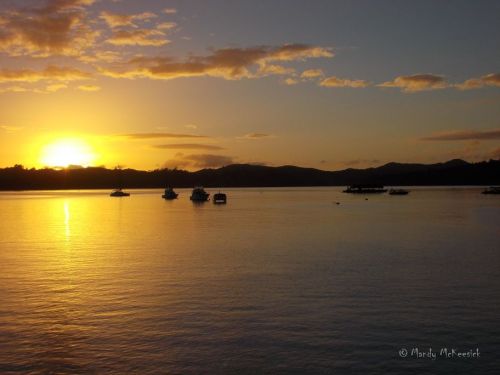 Based at Paihia on the Bay of Islands, I was even out of bed early enough one morning to catch the sunrise,

just before we went fishing with Captain Bucko and a couple of seasick Chinese tourists. For the record I caught a snapper and two hammerhead sharks. Brian caught a couple of undersized snapper and a cockle.

At Waitangi we joined the locals in a bit of tongue poking and learnt about Maori culture and the controversial treaty between these original New Zealand people and the English. A great day out, and one which even saw Brian singing!

On the wild west coast beaches of Piha, where the sand is a silky black, I ran through the waves with my niece and taught her the finer points of the game of “fly”. Then we had ice-cream, because that is what you do on a beach.

So that’s where I have been, just in case you were missing me.

You did realise I was away? Didn’t you Mob?