Down in the Dungeon

If you google “Dungeon and Kwiambal” this is what you will find:

This is the view I have seen several times as I’ve walked the marked track in Kwiambal National Park, about 40km from home, and peered into the deep gorge formed by the Severn River.

Several weeks ago I had plans to take the canoes and paddle the Severn upstream from The Dungeon, where the pools are long and deep. Somehow Brian got hold of that plan and gave it a shake. The canoes were left at home and Brian’s BFF, Col, was added instead. And now we were walking from the Parks-approved camping area, down the entire length of The Dungeon – probably not a Parks-approved activity.

The walk started off with grumbles about sore backs and busted knees, broken ribs and strained muscles. Within 500m Brian had twisted an ankle then I was reminded of a delicate hamstring while leaping boulders. Col, meanwhile, was sweating out the previous night’s intake from the Wallaroo. But we soon got into a rhythm.

We started with rock hopping

until we reached the start of The Dungeon 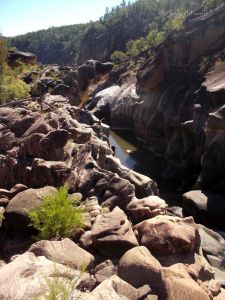 we eventually scrambled and slid into the steep-sided Dungeon. 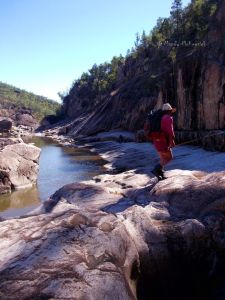 The rush of water through this gorge after rain must be an amazing sight (from the lookout, not from The Dungeon floor), and we were constantly in awe of the power generated, whether it be from stone worn smooth from wet season waterfalls 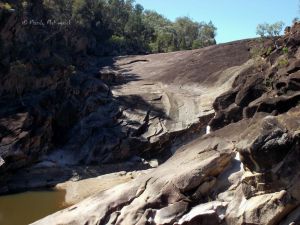 or from the tattered remains of a boat wedged under rocks.

We criss-crossed the river

and fished long pools without any luck.

We only got wet once 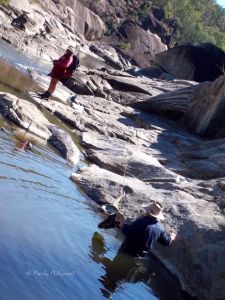 though Brian went to extraordinary lengths to avoid a repeat. 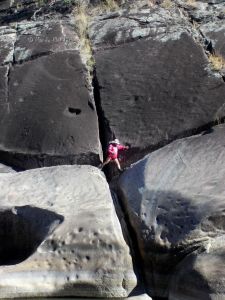 With light fading we emerged from The Dungeon amongst a puzzle of fallen boulders, and a couple of hours later we wearily pulled up outside the Wallaroo. We sat in the car and considered phoning the barman for table service, but there were tales to tell so we struggled inside.

For a fleeting moment we were not just cattle farmers but adventurers.

10 responses to “Down in the Dungeon”