Well, what a night! Wasn’t it fantastic? Snow falling, reindeer parading, igloos, a menu to die for and friends from around the globe.

What? What do you mean you don’t remember? Oh, well you were enjoying yourself. I mean all that dancing on tables and such – I’m not really surprised. Let me recap our night for you …….

First of all: the venue. We landed in Siberia of all places, within the Arctic Circle, and with snow falling gently we followed fairy lights to the most amazing igloo. And didn’t we all look fetching in our fur-lined hoods and mega-ugg boots?

Smitten by the photo of Chef Jamie as a 17-year-old beach bunny a whole pile of my high school friends turned up. Michael even did his best to compere – though you were a rowdy bunch to keep under control.

There were Kiwis and Americans, Danuta via Ireland and Bolivia, and Chester the Wonder Whippet made a special guest appearance with his entourage – and then spent the rest of the night cuddled up to a couple of eskimos.

Lyle turned up late, dropped his Saskatoon berries at the door and promptly disappeared looking for polar bear to shoot (as in photograph). The reindeer shook their heads.

After pre-dinner drinks and some international mingling it was time for the food. Being an eclectic mob your choice of ingredients was as follows: goat cheese, beef, lime, mint, olives, oranges, mango, Turkish Delight, kangaroo, prawns, abalone and quinoa. Chef James Smith, originally from the Bega Valley (Australia) and now a successful Canadian chef, took this crazy mix and created a masterpiece. In case your copy of the menu went through the wash, here it is again: 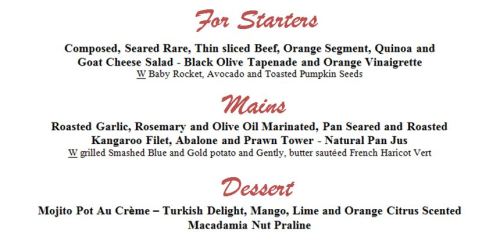 Fat and happy we danced the night away under polar skies, partying until the sun breached the horizon for a short 7 hours of daylight and a previously unimaginable maximum temperature of minus 27 degrees. The reindeer optimistically came in search for left-overs and were getting quite comfortable with the festivities until the fox–terribles made their presence felt.

It was a magic night. Thank you to everyone who suspended belief to join this virtual fiesta and who joined the madness by suggesting ingredients, but most of all thanks to Chef James, my brother from high school, for making our polar party a raging success. 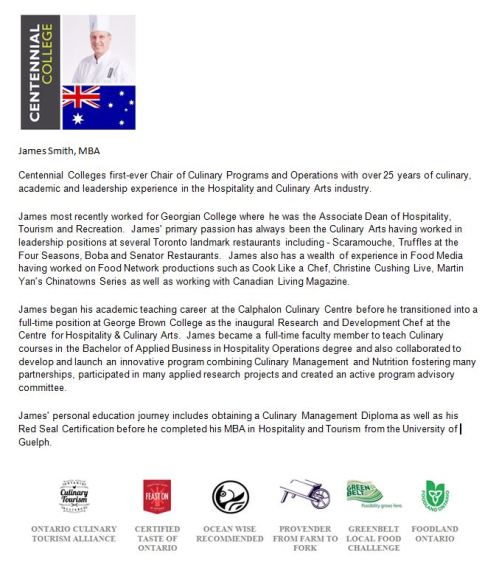